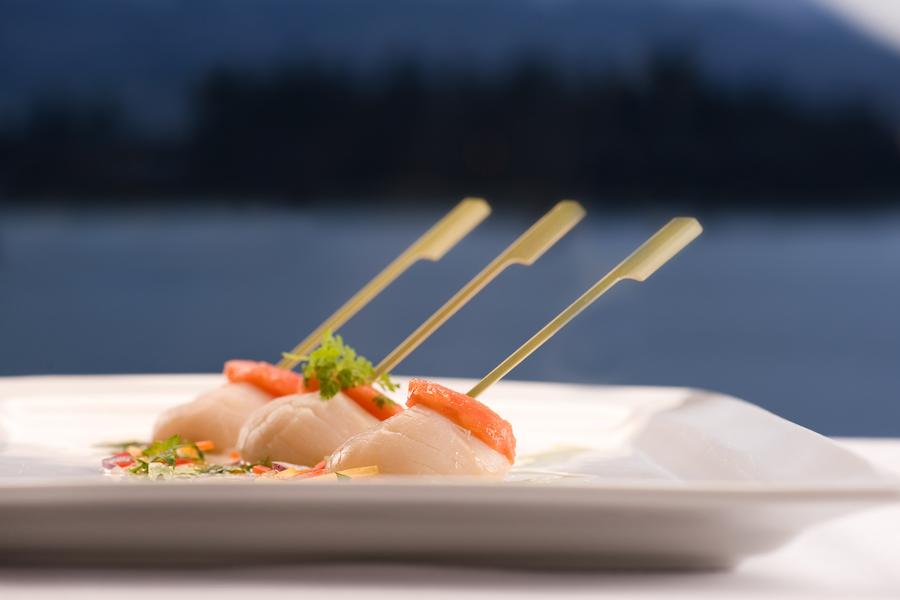 "Attendees who have visited the Vancouver Convention Centre can't readily forget its spectacular setting and dramatic architecture - but its F&B may leave the most lasting impression," Convene reported. "Since [1993], VCC has had a world-renowned chef, Blair Rasmussen, behind the whisk. Rasmussen not only leads a world-class Centerplate catering team, but has helped shape modern British Columbian cuisine, which fuses Asian Rim flavours with incredibly fresh ingredients."

PCMA Convene's "Best in Show" issue honours achievements and innovations in the meetings industry in 10 categories, including Food and Beverage. The Vancouver Convention Centre is one of five North American venues recognized in this category. Nominated by Convene readers and vetted by its editors, the winners are featured in the magazine's August 2015 issue.

The Vancouver Convention Centre, through its hospitality partner Centerplate, proudly operates a ‘scratch' kitchen using fresh, local and seasonal ingredients - from freshly caught seafood to produce from nearby farms and pastries baked fresh daily. Executive Chef Rasmussen credits the success of the Convention Centre's culinary programs to a number of factors, including having an incredible team of over 100 cooks and chefs that execute complex meals flawlessly every day.

"I also appreciate the autonomy to explore and purchase from local suppliers and use primarily local ingredients - a luxury that not all large venues have - allowing attendees to experience a taste of Vancouver through our food," adds Chef Rasmussen. "With the level of business, diverse range of events from international conventions to galas and weddings, to the growing expectations of our clients, I love the challenge we are faced with on a daily basis to continually elevate the culinary experience for our guests."

The culinary team has thrived on the remarkable growth in business since the Vancouver Convention Centre opened its West building, which effectively tripled its size. Operating a 10,000 ft2 main kitchen and a separate 9,000 ft2 pastry kitchen and bakery, a busy day for the team could include producing over 6,000 plated dinners for multiple events and making 10,000 dinner rolls from scratch.

"We are very fortunate to have such an amazing culinary team that has adapted and elevated our culinary offerings through the most significant growth in our history," says Craig Lehto, Assistant General Manager, Vancouver Convention Centre. "Under Chef Rasmussen's leadership, we have earned a remarkable reputation for food and beverage - one that is truly unconventional for a convention facility."

"Every member of our team strives every day to reflect the culture, values and community of Vancouver. It is extremely gratifying to receive this level of recognition from our peers and industry leaders," says Andrew Pollard, Regional Vice President for Centerplate. "We are proud to have the important role of welcoming guests to the Centre, and look forward to extending a distinctly Vancouver experience at every event we serve."

Vancouver is the proud host of PCMA Convening Leaders 2016, held on January 10 to 13 at the Vancouver Convention Centre. 4,000 of the industry's leading meeting professionals are expected to attend PCMA's flagship education event.

About Vancouver Convention Centre
Located on Vancouver's downtown waterfront with a dramatic mountain backdrop, the world's first LEED® Platinum certified convention centre offers one of the most beautiful settings in the world. The award-winning Vancouver Convention Centre features two connected buildings with a combined total of 466,500 ft2 (43,340 m2) of flexible meeting, exhibition, ballroom and plenary space. The facility is committed to environmental sustainability as well as unparalleled service, technology offerings and culinary excellence.

Centerplate is a global leader in live event hospitality, "Making It Better To Be There®" for more than 116 million guests each year at more than 350 prominent entertainment, sports and convention venues across North America, Europe and the United Kingdom, including the Vancouver Convention Centre and BC Place. Centerplate has been recognized five times with Convene Magazine "Best in Show" honours, and has provided event hospitality services to 30 official U.S. Presidential Inaugural Balls, 13 Super Bowls, 22 World Series, the 2010 Winter Olympic Games, and the largest plated dinner in history at the Alpha Kappa Alpha Centennial Celebration. Visit the company online at Centerplate.com, or connect via Twitter @centerplate or Facebook/centerplate.