HOW TO TAKE YOUR MEETING TO CANADA FOR THE FIRST TIME 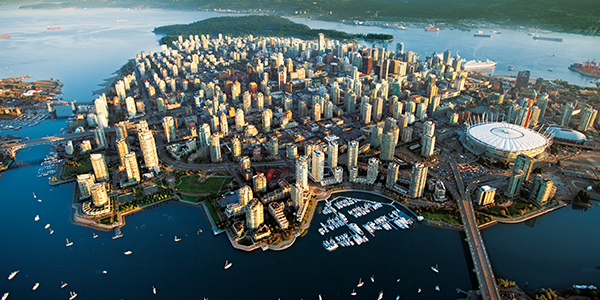 Originally posted on pcma.org, this educational article was brought to you by the Vancouver Convention Centre and Tourism Vancouver, two organizations dedicated to simplifying the lives of meeting planners and delivering unforgettable experiences for attendees. Click here to hear why planners like you are so impressed with Vancouver.

Many of the recent conversations in the meetings industry have focused on one key topic: the need to reach more international attendees. As more professionals around the world search for continuing education and networking opportunities, more US-based meeting planners are beginning to expand the site selection process outside the States.

For some organizations, taking the global leap can feel somewhat daunting. However, even a small step outside US borders can make a big difference in expanding an organization's reach.

Cindy Stark, a Director in Event Services for SmithBucklin Corporation, says after many years of discussing a global strategy, her client, ACM SIGGRAPH took action seven years ago.

"We have attendees from all over the world, and everyone on the team was ready to embrace a more international approach," Stark says. "In 2007, we selected Vancouver for our 2011 conference."

The new direction paid off. At the time, members of the computer graphics community - SIGGRAPH's target audience - were moving to Vancouver. With new studios opening their doors in the host city, the local audience circled SIGGRAPH 2011 on their calendars.

"Attendees absolutely loved it," Stark says. "They were in our office at the conference saying we had to come back to Vancouver."

Stark and the conference management team listened. They shifted some other host cities and rebooked 2014 immediately. Now, with two conferences full of happy attendees and exhibitors in the rearview, here's a behind-the-scenes look at how Stark and the SIGGRAPH team have charted a successful course in Canada.

Getting The Initial Buy-In
Every planner who works with association knows that change can be challenging. Since SIGGRAPH had never hosted this particular conference outside the US, Vancouver hosted a meeting for the organization's Conference Advisory Group (CAG) to help educate key decision-makers on the benefits of bringing attendees together in Canada.

"As a city, Vancouver did an incredible job," Stark says. "CAG members had a chance to see the site for themselves, and it was easy to picture how we could bring the conference and exhibition to life there."

Making Dollars Make Sense
It's the item near the top of every meeting planner's list: the budget. While currency exchanges might sound a bit cumbersome, Stark says US-based planners should not fear financial differences when organizing a meeting north of the border.

"If you're paying your bills by check, there can be more back and forth," Stark says. "Conversion rates can be a bit tricky, but it's not hard. It just might require more time to budget and get bills paid."

"Be sure to budget with the understanding that conversion rates might change slightly by the time the meeting arrives," Stark adds.

"For the 2014 conference, it actually played to our favor," Stark says. "The dollar was worth slightly more when the meeting arrived."

Communicating With Attendees
For attendees who do not regularly travel outside the US, they'll need some consistent reminders on identification requirements.

"You need to spend a lot of time educating your attendees that they will need their passports," Stark says.

It's never too early to start the education. Stark says SIGGRAPH worked with Tourism Vancouver to create a sizzle reel that promoted the destination and highlighted passport and paperwork requirements. Attendees saw the reel a full year in advance at the 2010 show. They could do more than simply watch, though. Stark worked with Tourism Vancouver to set up a Passport Booth at the show where attendees could fill out paperwork and take pictures for documentation if they did not have passports.

Stark recommends planners should continue reminding attendees throughout the meeting marketing campaign. However, she says it doesn't mean much of an increase in workload for the organization.

"The bureau is invaluable," Stark says. "They offer sample letters to put on your meeting's website and step-by-step instructions to hand over to attendees."

SIGGRAPH relied on another invaluable member of the team to attract attendees.

"The local SIGGRAPH chapter in Vancouver did a tremendous job in getting the word out," Stark says.

To help introduce the growing local community of prospective attendees to the conference, SIGGRAPH offered a special day rate for local audience members.

"We knew many of them had never come to SIGGRAPH," Stark says. "We offered a one-day, just-get-them-in-the-door rate. Once they see the action in the exhibit hall, you've got the hook for upcoming years. It's an investment in the long-term future of the conference."

Knowing What To Expect
For planners who are considering taking their groups to Canada, Stark has some simple advice: don't be afraid.

"Clearing customs is not an issue for exhibitors," Stark says. "They just need to get a customs broker, and they'll clear customs right on the show floor. The old days of shipping and waiting for gear are over."

"There is no difference in shipping from Chicago to a convention center in Los Angeles than shipping to the Vancouver Convention Centre," Stark adds.

That convenience combined with a collection of very satisfied attendees will keep SIGGRAPH coming back to Vancouver.