Everything You Need to Know About Winter Meetings in Vancouver

Winter in Vancouver is truly spectacular: mild temperatures so you can bundle up and explore on foot, and an easy 20-minute drive to the winter wonderlands of snow-capped mountains. Winter ushers in a

Your go-to resource for all things meetings and conventions in Vancouver is now on LinkedIn! Follow Meet Vancouver to learn about hot meeting trends and how to implement them at your Vancouver event;

Vancouver Events for Every Month of the Year

Hosting a meeting in Vancouver? One of the best ways to rub elbows with locals and treat delegates to full immersion into #VeryVancouver culture is to plan post-conference gatherings, teambuilding

The meeting world is buzzing with news of this year’s top conference trends – and we’re here to help you bring them to life! Whether dishing up brain-enhancing buffets, organizing event space to meet

Five Ways to Execute a Sustainable Event in Vancouver

5 KEY TRENDS THAT WILL IMPACT CONVENTION CENTERS IN 2015 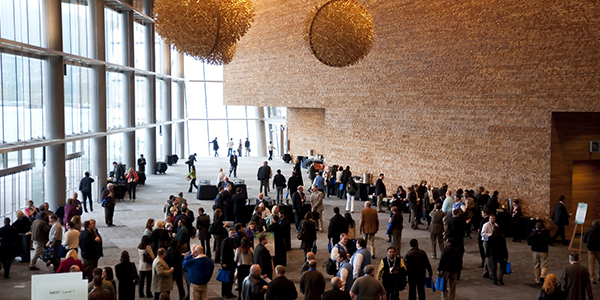 Originally posted on pcma.org, this educational article was brought to you by Tourism Vancouver and the Vancouver Convention Centre, which offers 500,000 square feet of flexible space and ideal downtown location, delivering the ultimate combination for organizations such as SIGGRAPH, TED and the United States & Canadian Academy of Pathology. Click here to hear why planners like you are so impressed with Vancouver.

No matter where you turn in the meetings industry, you'll find one common characteristic: change. From planners who are rethinking attendee engagement strategies to exhibitors who are redesigning booth spaces to sponsors who are reevaluating where their dollars go, conferences and trade shows are breaking up with tradition.

The future is beginning to look very different for the biggest - literally - members of the industry, too. Convention centers, with their tens of thousands of auditorium seats and millions of square feet of exhibit space, are in a period of transformation. As the industry looks ahead to 2015, here is a preview of five key trends that will impact convention centers.

1) The definition of meeting space will evolve.
While conversations about convention centers typically include square footage figures and meeting room numbers, more meeting planners are looking for one essential adjective to describe the space inside a convention center: flexible.

"People no longer want to be shut in a room for a long period of time," Claire Smith, Vice President, Sales and Marketing, Vancouver Convention Centre, says. "Their attention spans are shorter, and they crave more opportunities to move around, meet people and share ideas."

Smith admits that the shift in human behavior can be challenging for some convention centers.

"It can be hard to respond to behavior changes when you're a brick and mortar," Smith says. "There are limitations to adjusting a physical space."

However, many meeting planners are overcoming those limitations, and Smith highlights that previously under-utilized portions of convention centers are playing an important role in attendee engagement.

"The foyer is the new meeting room," Smith says. "We're seeing groups use that space in ways we never would have imagined with attendees sitting cross-legged on the floor to participate in pop-up dialogues and full session presentations specifically scheduled for the foyer."

2) What's outside will matter even more.
Earlier this year, at the CEIR Predict Conference, Bob Priest-Heck, President and COO of Freeman, highlighted that an emerging generation of attendees looks at venues in a new light.

"Millennials don't see the convention center as the place where the event is happening," Priest-Heck said. "They look at the whole city as the venue."

Smith agrees, citing the 2011 Risk Insurance Management Society Annual Meeting as a prime example. From events at off-site destinations throughout the city to a sponsored sailboat with custom logos in the harbor outside the convention center, Smith says the organization is very conscious of using every inch of a destination to elevate the experience.

"It's important to celebrate the cities we're meeting in," Smith says.

"The great news for our industry is that governments around the world are recognizing the great economic impact that convention centers bring, and they're willing to invest in their development and expansion," Smith says.

"It's a true testament to the vibrancy and success of the face-to-face industry," Smith adds.

4) Yesterday's pricing will be a memory.
Governments want those investments to pay off. As many cities face serious budget challenges, Smith says elected officials are putting more pressure than ever before on convention center profitability.

"Now that the economy is rebounding, the expectation is that convention centers will start to be more self-sufficient," Smith says. "Some of these cities are struggling to meet their budgets, and some of them no longer have the ability to subsidize a convention facility."

"The business model is going to need to shift," Smith adds. "Event organizers may not get the same deals as they did in the past, and they will need to pay more for the services that they are utilizing."

However, Smith says planners should not fear price changes.

"The market is getting a little bit tighter," Smith says. "We'll start to see prices rise, but not dramatically."

"IACC member properties continue to control costs and manage another year of improving occupancies," Cooper says. "Conference centers are showing restraint in hiking prices to their customers, which shows a long-term approach and commitment to their customers."

5) Each attendee's appetite will factor into F&B decisions.
Education sessions and pricing are certainly important to meeting planners, but there is one piece of a meeting that matters to every attendee: their stomachs. Smith says convention center catering departments are facing one big question.

"How do we feed a large number of people in a convention center and allow individuals to customize the menu exactly as they please?" Smith asks.

Attendees are accustomed to personalizing everything from their smart phones to the prices they pay for groceries, and they are bringing those same expectations to meetings. This puts increased pressure on planners and venues to deliver fresh, healthy and quick menu items to thousands of attendees. The new era of heightened expectations is leading many planners to return to an old approach to food.

"The buffet is coming back," Smith says. "They went out of style for a period, and everyone wanted plated service. Now, buffets and modified buffets are giving attendees the ability to eat what they like and avoid items they don't want."