Everything You Need to Know About Winter Meetings in Vancouver

Winter in Vancouver is truly spectacular: mild temperatures so you can bundle up and explore on foot, and an easy 20-minute drive to the winter wonderlands of snow-capped mountains. Winter ushers in a

Your go-to resource for all things meetings and conventions in Vancouver is now on LinkedIn! Follow Meet Vancouver to learn about hot meeting trends and how to implement them at your Vancouver event;

Vancouver Events for Every Month of the Year

Hosting a meeting in Vancouver? One of the best ways to rub elbows with locals and treat delegates to full immersion into #VeryVancouver culture is to plan post-conference gatherings, teambuilding

The meeting world is buzzing with news of this year’s top conference trends – and we’re here to help you bring them to life! Whether dishing up brain-enhancing buffets, organizing event space to meet

Five Ways to Execute a Sustainable Event in Vancouver 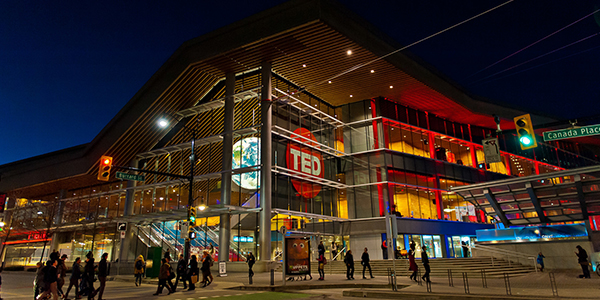 I spent last week with Bill Gates, Monica Lewinsky and a cast of acclaimed experts with ideas on how to solve some of the world's most pressing problems. Well, I should be clear - I didn't exactly spend one-on-one time with the founder of Microsoft or the most famous intern in White House history. However, I did have the opportunity to feel the energy of TED2015 first-hand on a trip to Vancouver.

In between touring the award-winning, LEED Platinum-certified Vancouver Convention Centre, sampling the finest wines of British Columbia and biking around the most impressive park in North America (you'll hear about all of this soon), Tourism Vancouver and the the Vancouver Convention Centre offered me a glimpse of how TED connects the transformative on-site experience on the shores of Vancouver Harbour with the rest of the world. As more organizations begin to operate with a "content is king" mindset, TED's strategy offers a clear path to success. Here are four key lessons that will resonate with every meeting planner.

1) Impact relies on extending your reach to the digital world.

A seat in the TED2015 theater came with a steep price tag that started at $8,500. While the on-site registration fee is expensive and the attendee base is elite, TED has managed to build a brand that feels exclusive to its biggest supporters and inclusive of everyone around the world at the same time. The secret? Sharing. TED doesn't operate with the typical your-online-account-costs-this-much-each-month mentality. Instead, the organization lives and breathes its "Ideas Worth Sharing" motto with the understanding that everyone should be able to see and hear groundbreaking innovations. Simply put, if you're on the internet, you can be part of TED.

2) Quality is still the key.

Creating content is easy. Producing top-notch videos is another story. In an environment where lo-fi thirty-second kitten videos can collect millions of views on YouTube, it can be tempting to believe that any piece of content is synonymous with good content. However, TED recognizes that the best quality still has the best chance of connecting with people.

Craig Lehto, Assistant General Manager, Vancouver Convention Centre, saw the focus on quality come to life throughout the 2015 conference. While the program in the theater concluded each night by 8:00 PM at the latest, Lehto says that TED's video editing team was hard at work until past 2:00 AM to make sure new videos looked and sounded flawless.

That focus didn't just play a role once each speech was over, either. In fact, one speaker's silver necklace was creating some lighting issues during the first minutes of her speech. Rather than risk a video mired by the distraction, the production team asked the speaker to stop during her address, remove her necklace and restart the speech. While that may interrupt the flow of the on-site experience, TED knows that each video's lifespan will be much bigger than 20 minutes.

3) It's easy to overwhelm an audience.

The TED2015 program included more than 90 speakers. With behavioral economists, singer-songwriters, neuroscientists and more, the lineup read like a ballot for the Inspiration Hall of Fame. Based on so many notable names, some organizations might want to unload every video throughout the conference in the hopes of creating a huge online buzz at the same time. However, the faces behind all those glowing screens can only digest so much content at one time. Lehto highlighted that TED focuses on picking just one video to share each day.

"TED knows it's all about letting the right raindrop fall," Lehto says. "Instead of unleashing the whole storm of material at once, TED picks the very best idea to share once each day."

"Think about how exciting it's going to be to send that around the world - probably tomorrow," Chris Anderson, TED Curator, said after Lewinsky finished a brave and powerful speech on the need to address cyberbullying.

It's clear that Anderson picked the perfect raindrop. From The Guardian to the Washington Post to the New York Times, Lewinsky's speech made headlines around the world and collected more than 600,000 fews in just a few days.

4) Video only tells part of the story.

Not sure if your meeting should have a blog? One look at TED's site will reassure you that a regularly updated online destination is essential. From "The top 10 words of TED2015" to "7 quotes from HIs Holiness the Dalai Lama at TED2015", the organization's blog lets any reader get lost in post after post of bite-sized wisdom. For those prospective attendees who are still on the cusp of whether to invest the big chunk of cash to be part of the 2016 conference, TED's team flexes the ultimate marketing muscle: a captivating behind-the-scenes look at what they missed in 2015.

Stay tuned for more of my thoughts on what makes Vancouver a premier host city for the convention industry along with my takeaways from TED, and be on the lookout for a full feature in the May issue of Convene from my colleague, Corin Hirsch. Until then, check out "How To Take Your Meeting To Canada For The First Time" for a perspective on why your organization should bring attendees together north of the border.