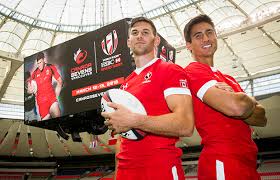 In March 2016, Vancouver's BC Place Stadium will host the World Rugby Seven Series, a circuit of international rugby tournaments played at select cities around the globe and featuring 16 of the world's top men's rugby sevens teams. This shorter, faster-paced style of rugby is an ideal spectator sport and is played with seven players per side (as opposed to the standard 15) and has a strong following in Europe, Australia, New Zealand, South Africa and parts of Asia. In past years, series hosts have included heavy-hitting sports centres like Dubai, the Gold Coast, Wellington, London and Glasgow. Now that Vancouver is one of the series' official host cities, the league will enjoy one of its largest stadiums with BC Place accommodating 54,000 seats. The 2016 premier for the annual Vancouver tournament will coincide with rugby sevens being named an official Olympic sport at the Rio 2016 Olympic Games. Rugby Sevens fans are known for their high spirits and crazy costumes. The Rugby Sevens will return to Vancouver on an annual basis each winter. www.bcplacestadium.com